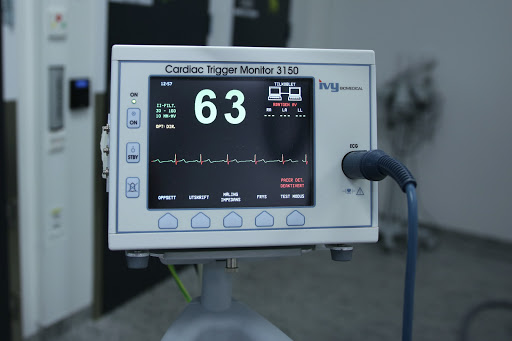 Doctors order an electrocardiogram (also called an EKG or ECG) to check for heart abnormalities. They’re sometimes performed as part of regular cardiac workup and other times to assess a patient’s cardiovascular risk for a non-cardiac surgery.

There are different kinds of EKG, and they are typically described by the number of leads. There are 1, 3, 6, and 12-lead EKGs. The EKG machine records changes in the electrical potential between electrodes placed on the skin. The change in electrical potentials is caused by cardiac activity.

The more electrodes that are applied to the patient’s skin, the greater the information that’s provided on a digital or paper EKG recording. In many operating rooms, anesthesia providers routinely place a 3-lead EKG before the surgery starts.

If the 3-lead EKG shows something abnormal, the anesthesia provider has to think about whether it’s necessary to stop the surgery to do a more thorough 12-lead EKG workup. In most settings, it costs pennies to apply the additional electrodes and 10-15 minutes to perform a 12-lead EKG.

I’m working on a medical malpractice wrongful death case where an anesthesiologist and certified registered nurse anesthetist (CRNA) essentially ignored a potential 3-lead EKG abnormality. The anesthesiologist was concerned enough that before the surgery started she documented in the patient’s medical record “possible ST elevation.”

Even though the surgeon wasn’t in the room and the elective orthopedic surgery hadn’t started, the anesthesiologist and CRNA decided against doing a quick, inexpensive EKG that would have, in this patient’s case, revealed that it was unsafe to proceed with the surgery.

What’s worse is that the anesthesiologist agreed, at deposition, that she would’ve canceled the elective orthopedic surgery and sent the patient for a full cardiac workup if she had confirmed the possible ST elevation with a 12-lead EKG.

During the autopsy, the pathologist found that this man had an enlarged heart and severely occluded or clogged coronary arteries. The patient didn’t know about it because he had never been diagnosed with these conditions.

A 12-lead EKG would have shown something was wrong. A reasonable anesthesiologist would’ve canceled the surgery and ordered a cardiac workup that would’ve saved his life. Instead, shortly after the successful orthopedic surgery ended and the surgeon left the OR, the patient went into respiratory arrest, which progressed into cardiac arrest. He never woke up from surgery and died that day.

What is an ST elevation?

Physicians, cardiologists, and other heart specialists use a naming convention for the different bumps, peaks, troughs, and lines that appear on an EKG. The letters that they use include P, Q, R, S, and T. These medical experts look at the EKG drawings for things like the PR interval, PR segment, QRS complex, J-point, ST segment, and QT interval.

One concerning finding that all doctors look for on an EKG is an ST elevation. There can be many causes of ST elevation. Here are a few:

• Pericarditis (inflammation of the tissue surrounding the heart, called the pericardium)

One thing’s for sure, if there’s a suspected or confirmed ST elevation, it’s not something to be ignored or delayed. The patient needs a detailed workup by a cardiologist.

Incredibly, the anesthesiologist who I recently deposed testified that it would be important for the patient to have a 12-lead EKG after the surgery. She would either do one in the recovery room or refer the patient to a cardiologist.

In my experience as a Houston, Texas medical malpractice attorney, there’s a lot of pressure in operating rooms to keep the patient flow moving. It’s dangerous, though, to sacrifice patient safety at the altar of operating room efficiency and profitability.

If you or a loved one has been seriously injured or even, sadly, a victim of wrongful death because of poor physician, hospital, or operating room care, then a top-rated attorney focusing on Texas medical malpractice can help you evaluate your potential case.